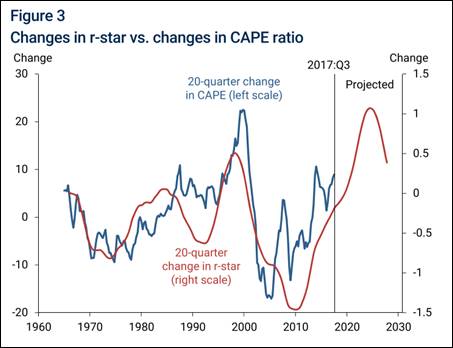 Equity valuation has been a hot topic of late. Rightly so.

The Big Picture drew our attention on this interesting paper about the cyclically adjusted PE, the famous equity valuation measure also known as the CAPE or Shiller PE.

Kevin J. Lansing from the Federal Reserve Bank of San Francisco adds his own voice to the valuation debate by regressing the CAPE ratio on a simple set of macroeconomic variables.

Let us go through these propositions by reviewing some of their methodological assumptions as we understand them. Our alternative suggestions can be found at the end of this note.

For the quants of yours, please consider
“Stock Market Valuation and the Macroeconomy” (1) (bold ours)

And Lansing to conclude:

Regression models are indeed great tools to apprehend economic relationships, but assumptions matter even more when it comes to draw conclusions.

Let us revert to the two-step forecasting approach that seems to drive the methodology :

Let us start with the second step, the descriptive model.

As suggested by the chart below, we suspect the interest rate part of the regression, in this case the 20-quarter change in r-star, to dominate the regression.
Big time.

This leads to a few questions :

Back to the first step of the approach, the forecasting one, Lansing gives some more hints:


So GDP projections are based on the CBO estimates, that is a gradual rise of potential growth over 10 years. At the same time r* is a function of the same – gradual – projection. And what about inflation?

‘A reasonable projection’ ?  Looks like it’s precisely the question hiding behind the whole valuation issue.

Indeed the model captures most of the CAPE run-up as stock valuation became increasingly dependant on interest rates. Whether monetary policy normalizes smoothly or not, growth picks-up or not, and inflation misses the FOMC target or not is out of the scope of the model, unfortunately.


We suggest the following alternative propositions :

And this topical question surrounding growth forecasts : which reasonable projection should the CBO make for credit ?

We're not around right now. But you can send us an email and we'll get back to you, asap.