It is also time to recall some of our propositions with regards to public authorities (see Fed decision: the multiplier effect).

More generally this note underlines the multifaceted normalization path that is taking place in the financial, real and public spheres:

Less than two weeks before the next FOMC, Fed Chairwoman Janet Yellen spoke about the strength of the US economy yesterday at the Economic Club of Washington. A good opportunity for the markets to gauge the timing, pace and speed of the much awaited exit strategy.

Mrs. Yellen about the US economy:

I anticipate continued economic growth at a moderate pace that will be sufficient to generate additional increases in employment, further reductions in the remaining margins of labor market slack, and a rise in inflation to our 2 percent objective.

And the impact of international developments:

Although developments in foreign economies still pose risks to U.S. economic growth that we are monitoring, these downside risks from abroad have lessened since late summer. Among emerging market economies, recent data support the view that the slowdown in the Chinese economy, which has received considerable attention, will likely continue to be modest and gradual. China has taken actions to stimulate its economy this year and could do more if necessary. A number of other emerging market economies have eased monetary and fiscal policy this year, and economic activity in these economies has improved of late.
As the markets seem to do, we would challenge these statements: China and emerging markets remain on a systemic contraction path.

So what does that mean for policy actions (emphasis is ours) ?

Were the FOMC to delay the start of policy normalization for too long, we would likely end up having to tighten policy relatively abruptly to keep the economy from significantly overshooting both of our goals. Such an abrupt tightening would risk disrupting financial markets and perhaps even inadvertently push the economy into recession.

Moreover, holding the federal funds rate at its current level for too long could also encourage excessive risk­ taking and thus undermine financial stability.
The Fed seems to be in a corner: leading indicators point to the downside while, at the same time, financial stability is at stake. Two forces that seem to be well captured by the short and long ends of the US yield curve, a pattern of inversion we’ve been describing on various occasions: 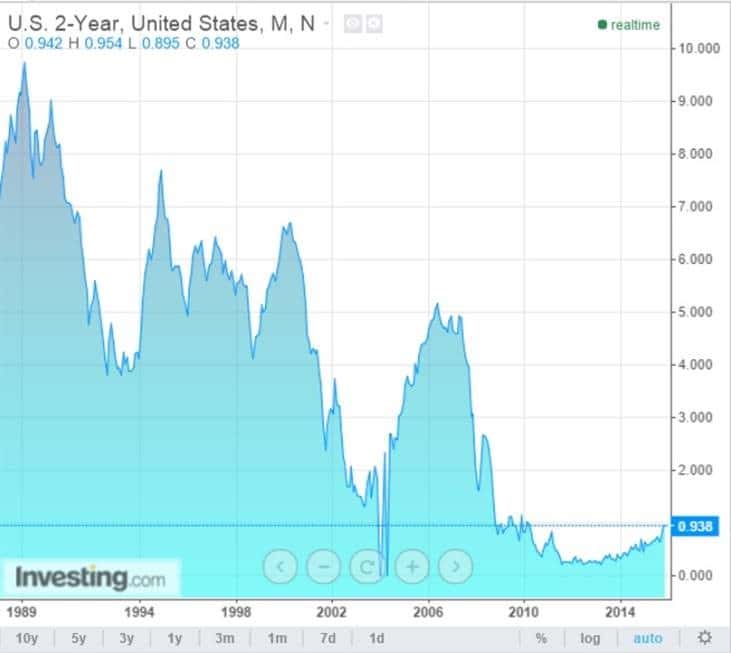 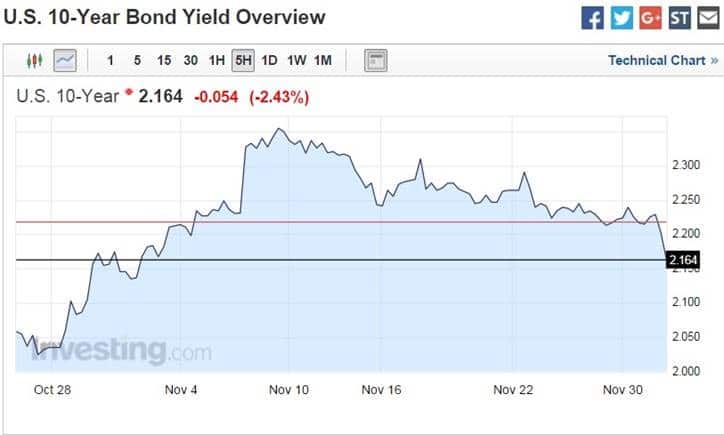 In an inspiring article published in the FT (1), Edouard Carmignac stresses the same contradiction:

The Fed is embarrassed by this cocktail of global economic fragility and deflationary pressures. But it is now in a bind. Seven years of cheap funding has led to increased financial risk, notably via an explosion of US corporate releveraging. It triggered misallocations of resources and inflated asset bubbles that a central banker cannot keep encouraging without putting its own credibility at risk. Therefore Fed chair Janet Yellen is now having to start tightening into an economic slowdown. This is hardly a reassuring perspective for equity markets.

In Europe, Mr Draghi can and will keep pumping. And this might keep encouraging investors to bet on the relative outperformance of European equities. But any investor targeting absolute performance should ponder this unpleasant truth: a global economic slowdown, accompanied by the deflationary effects of industrial overcapacity in China, is now on a collision course with diminishing central bank influence.

So what should investors do?

Taking risk off the table might feel excessive or too early at first. But when markets stop defying the laws of gravity, investors could get sucked into a vortex — a run on liquidity, and find no place to hide. The fragility of world equity markets today warrants a low risk exposure, with that exposure focused on companies with proven pricing power and top line growth visibility.  Back to fundamentals.

“Back to fundamentals”, Carmignac says: we couldn’t agree more …

A summary of our propositions with regards to central banks, financial, real and public normalization: